A Senate Bill That Makes Roads and Railroads Less Safe 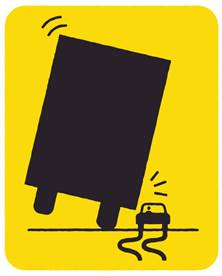 Last month the House passed an appropriations bill that would put bigger trucks with overworked drivers behind the wheel on the nation’s highways. If that weren’t irresponsible enough, the Senate is now considering legislation that would allow trucking companies to hire 18-year-old drivers for interstate routes and undermine safety on roads and railroads in numerous other ways.

Even by the low standards of the current Congress, these bills are egregious examples of faithfully saying yes to everything industry wants, in this case the transportation companies. The Senate is expected to take up its disingenuously named Comprehensive Transportation and Consumer Protection Act of 2015 this week as part of a larger transportation package that reauthorizes federal agencies and programs.

One of the measure’s worst provisions would lower the minimum age for interstate truck drivers to 18, from 21, in a misguided attempt to help the industry recruit more drivers. (Most states allow people as young as 18 to drive trucks within state limits.) Studies show that teenage and young adult drivers are much more likely to be involved in accidents than other adults.

It would be foolish to allow these inexperienced drivers to drive long distances in large, heavy trucks. A far better way to address a shortage of drivers would be for the industry to raise wages and improve working conditions.

Another provision would eviscerate federal rules on how much rest truckers must get. Companies would be allowed to seek temporary or permanent exceptions from the Department of Transportation’s rules governing hours of driving. Those regulations are already quite lenient because they allow truckers to drive up to 60 hours in seven consecutive days or 70 hours in eight days before getting at least 34 hours of rest. The House voted in June to postpone those rules pending another study.

The Senate bill would also forbid the department to publish safety ratings of trucking and bus companies, which it currently does on a website. The legislation would also make it much harder for the department to increase the minimum insurance requirements for trucks and buses that were last set in 1985.

That’s not all. The bill would delay an end-of-year deadline for railroads to install positive-train control technology to help prevent accidents like the Amtrak crash in Philadelphia in May that killed eight people and injured more than 200. It would also delay a federal rule that requires trains carrying crude oil to have brakes that can stop all cars at the same time, rather than sequentially.

The Senate bill also falls well short of addressing important issues raised by recent scandals involving defects in General Motors’ ignition switches and Takata airbags. While it would raise the maximum fine that the National Highway Traffic Safety Administration can levy against automakers that do not promptly disclose defects to $70 million from $35 million, that increase is a pittance for companies that make billions in profits. And by not proposing criminal liability for executives who knowingly hide the life-threatening dangers of their products, the bill simply sidesteps the issue of individual accountability.

During hearings about auto defects in recent months, lawmakers from both parties spoke forcefully about safety failures and the need to make driving less dangerous. This legislation does not come close to matching their words. Unless this bill is fixed on the Senate floor, it will lead to more accidents, deaths and injuries on American roads.