Advocates’ Statement on the Passing of Senator John McCain

Advocates for Highway and Auto Safety (Advocates) mourns the loss of Senator John McCain (R-AZ) and also celebrates the life of a true safety hero.  Senator McCain was a good friend of Advocates who championed numerous safety measures to protect consumers and prevent motor vehicle crashes, deaths and injuries.  As Chair of the Senate Commerce, Science, and Transportation Committee, he helped advance bipartisan safety legislation that addressed deadly safety defects and industry cover-ups including the Firestone/Ford tire controversy linked to over 200 deaths and 800 injuries.  Thanks to his leadership, Congress passed the Transportation Recall Enhancement, Accountability and Documentation, or TREAD, Act (P.L. 106-414).  This landmark law created a mandatory early warning system requiring automakers to collect and report vital information on crashes, claim dates, and other information that can be used to identify potentially deadly vehicle problems and defects.  The law also required the U.S. Department of Transportation (DOT) to upgrade its tire safety standard and increased penalties on the auto industry for purposely hiding safety problems.

Senator McCain was also deeply concerned about the mounting fatality toll from rollover and ejection crashes, particularly in vehicles with a high center of gravity like sport utility vehicles.  In response, he proposed legislation that eventually resulted in the U.S. DOT regulations requiring rollover prevention technology to be included as standard equipment in all vehicles.  This technology has been a game-changer.  The National Highway Traffic Safety Administration (NHTSA) found that from 2011-2015, electronic stability control systems have saved more than 7,000 lives.  These legislative battles were always controversial and contentious but Senator McCain never hesitated to stand up to powerful lobbying interests like the auto and trucking industries to protect the safety of families in every state.  And, as Committee Chairman he found support for auto safety measures with his Republican and Democratic colleagues.  His determination to advance safety measures in the face of overwhelming opposition has saved thousands of lives, which is why Advocates honored Senator McCain’s significant safety achievements with a “Highway Safety Leader” award in 2010. 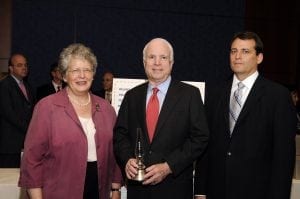 Jackie Gillan, president emeritus of Advocates, worked with Senator McCain on all of these highway and auto safety issues.  She remembers him as a loyal friend and a fearless advocate:  “Senator McCain championed numerous legislative solutions to advance highway and auto safety.  They were always the right thing to do even if they were not always the most politically popular thing to do,” she said.  “Today we are all driving safer cars on safer roads because of his concern and commitment to safety.  He will be deeply missed by the safety community.”

Cathy Chase, president of Advocates, remembers Senator McCain as a strong ally who always managed to reach across the aisle and attract bipartisan support to solve even the most contentious problems:  “Senator McCain had a unique ability to bridge political divides and turn people who should have been fierce rivals into steadfast partners in the fight for safety,” Chase stated.  “The safety community holds Senator McCain in the highest regard for his dedication and devotion toward making cars and our nation’s roads and highways safer for all road users.”

Joan Claybrook, a founding board member of Advocates, president emeritus of Public Citizen and a former Administrator of the National Highway Traffic Safety Administration, remembers Senator McCain as a fighter who stood up to special interests to advance safety:  “Countless lives have been saved thanks to Senator McCain’s monumental safety legacy in Congress,” said Claybrook.  “He recognized the benefits of federal vehicle safety standards and their lifesaving and cost-saving contributions to preventing deaths and serious injuries.  As a former NHTSA Administrator, I know how influential special interests are and I deeply appreciate Senator McCain’s courage and leadership in standing up to them and taking action to push for criminal penalties for the willful production of unsafe and defective cars.  He was a determined legislator, a shrewd tactician and a valued friend. ”