Statement on the Passage of the Moving Forward Act (H.R. 2) by the U.S. House of Representatives 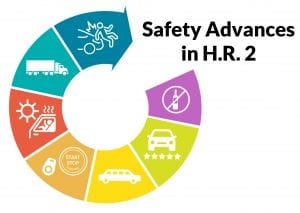 Statement of Cathy Chase, President, Advocates for Highway and Auto Safety, on the Passage of the Moving Forward Act (H.R. 2) by the U.S. House of Representatives

Perhaps no auto safety development in recent years has shown more promise at helping motorists avoid crashes than ADAS.  Features such as automatic emergency braking (AEB), lane departure warning, and blind spot warning are proven and effective, but not provided to all car buyers.  The National Transportation Safety Board (NTSB) has recommended collision avoidance technologies as key to preventing not only vehicle collisions but also crashes involving pedestrians and bicyclists.  Pedestrian and bicyclist fatalities both reached their highest level in nearly three decades in 2018, according to the National Highway Traffic Safety Administration (NHTSA).  The Moving Forward Act requires these systems as standard equipment in all new cars, subject to minimum performance requirements.

Drunk driving remains a leading killer on America’s roads, with nearly one-third of all fatalities attributed to alcohol-impaired driving.  The Moving Forward Act requires the U.S. Department of Transportation (DOT) to issue a final rule requiring technology, such as systems that monitor driver behavior or detect the presence of alcohol, be installed as standard in new cars.  This innovation holds the potential to eliminate the scourge of impaired driving.

In addition to requiring AEB in new cars, the Moving Forward Act directs AEB in new CMVs over 10,000 lbs. and school buses.  With nearly 5,000 people killed in truck crashes in 2018 and nearly 150,000 more injured in 2017, the latest year for which data is available, this is a major safety victory that will save numerous lives.  Additionally, a long-overdue update to the standard for rear underride guards on trucks and research to study the addition of side guards is included in the bill.  This considerable advance will help stop cars from traveling under the rear or side of a truck’s trailer and allow safety systems on passenger vehicles, including air bags and seat belts, to work as intended to properly protect occupants of cars – saving lives and preventing injuries.  The bill also will increase transparency to identify and intervene with unsafe motor carriers as well as mitigate the well-known problem of tired truckers.

Between 2018 and 2019, over 100 children died as a result of being unknowingly left in a vehicle or accessing the vehicle independently and inadvertently getting trapped inside.  This devastating toll could be prevented by the installation of technology, which is available and affordable, to detect the presence of an occupant and issue a warning that attracts attention.  This bill takes the vital step of directing automakers to equip all new cars with effective technology to save precious lives.

When the United States became the first nation to crash test new vehicles and publish the results for consumers more than four decades ago, it launched a new era of accountability by incentivizing manufacturers to produce safer vehicles that would perform well on the tests.  Unfortunately, the U.S. New Car Assessment Program (NCAP) has not kept pace with the latest auto safety advances and now seriously lags behind its international counterparts.  The “stars on cars” showroom stickers do little to provide consumers with the information they need to make informed car-buying decisions.  The Moving Forward Act achieves much-needed upgrades to U.S. NCAP.

Many car owners have become used to the convenience of keyless ignition systems, also known as push-button starts, a feature that was installed as standard equipment on nearly two-thirds of vehicles sold in 2018, according to Edmunds.  Unfortunately, this technology has resulted in the unintended deadly consequences of carbon monoxide poisoning and vehicle rollaway.  The Moving Forward Act addresses these known hazards by requiring the U.S. DOT to issue a safety standard for keyless ignition systems.

Safer School Buses to Protect Our Most Precious Passengers

Equipping school buses with seat belts and other essential systems will make kids safer as they travel to and from school.  The NTSB has made a number of recommendations for school bus safety following investigations of horrific crashes.  The Moving Forward Act turns these findings into policy by spurring action on safety belts, requiring automatic emergency braking and electronic stability control, and directing research on fire prevention and mitigation.

Limousine rides are commonly associated with some of the most wonderful events in one’s life.  Sadly, due to unacceptably weak standards, a crash involving a limousine can turn someone’s happiest day into their worst nightmare.  By directing the U.S. DOT to take action to upgrade the safety of limousine performance and operations, the Moving Forward Act will give limo occupants better protections and help prevent avoidable tragedies.

We were pleased to see several amendments passed that will further bolster the safety provisions in the bill and thank the sponsors for championing these important provisions including:

Advocates also lauds Members for defeating several anti-safety amendments that would have not only weakened the safety provisions in the bill, but also threatened safety protections in current law.  Advocates’ full “Safety Scorecard” with our vote recommendations for all of the amendments considered can be found here.

The Moving Forward Act is the latest in a long line of surface transportation reauthorization bills with a strong safety title.  With tens of thousands of deaths every year, millions of injuries and comprehensive costs of motor vehicle crashes surpassing $800 billion dollars, the urgent need for action is clear.  Today, the U.S. House of Representatives passed a remarkable piece of legislation that will make the Nation’s roadways safer for all, if enacted into law.  We urge the Senate to move forward with these commonsense, evidence-based safety advances.