Statement on the 20th Anniversary of the .08 Percent Blood Alcohol Concentration Law

Statement of Advocates for Highway and Auto Safety on the
20th Anniversary of the .08 Percent Blood Alcohol Concentration Law

Lifesaving limit has reduced drunk driving crashes and saved tens of thousands of lives.  New countermeasures must be employed to continue to address this persistent public safety threat.

Today marks two decades since the momentous enactment of the law that required states to lower the limit for blood alcohol concentration (BAC) while driving to .08 percent or face withholding of federal funds (Pub. L. 106-346).  This significant achievement was enacted with bipartisan support in Congress and signed into law by President Bill Clinton.  This long and hard-fought safety victory would not have been accomplished without the collaborative efforts of many public health and safety organizations, and especially the brave and tireless efforts of drunk driving victim advocates coalesced by Mothers Against Drunk Driving (MADD).

Cathy Chase, President of Advocates for Highway and Auto Safety (Advocates), noted, “The David vs. Goliath battle to lower the national blood alcohol concentration limit to .08 percent was a landmark example of a scientific and data-driven solution combined with the blood, sweat and tears of drunk driving victims’ families and dedicated safety advocates.  With more than 10,000 people still dying each year on average in impaired driving crashes, we must take the next step of requiring advanced impaired driving prevention and detection technology in all new cars as standard equipment, with a minimum performance standard.  Sens. Rick Scott (R-FL) and Tom Udall (D-NM) and Rep. Debbie Dingell (D-MI) have introduced legislation to accomplish just that, and the issue was included in the Moving Forward Act (H.R. 2), passed by the U.S. House of Representatives in July.  This week the U.S. landed a spacecraft on an asteroid.  Certainly, we can bring technology estimated to be able to prevent more than 9,000 drunk driving fatalities every year over the finish line.” 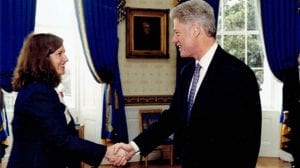 Jackie Gillan, President Emeritus of Advocates said, “In 2000, Congress passed one of the most consequential laws to combat drunk driving in our country.  Bipartisan and bicameral leaders, including Sen. Frank Lautenberg (D-NJ), Sen. Mike DeWine (R-OH), Sen. Richard Shelby (R-AL), Rep. Frank Wolf (R-VA) and Rep. Nita Lowey (D-NY), worked together to enact legislation requiring states to adopt a .08 percent BAC law within three years or face losing millions in highway construction dollars.  Experience confirmed that .08% BAC laws saved lives.  Funding sanctions proved to be an effective strategy to ensure every person in every state was protected. Less than half of the states had a .08 percent BAC law in 2000.  Three years later it was the law of the land and not a single state lost a single dollar of federal funds.  Needless personal losses, committed political leadership, and strong public support were the hallmarks of this achievement.” 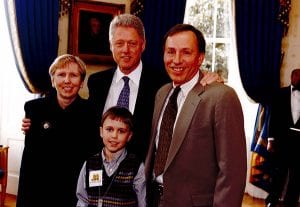 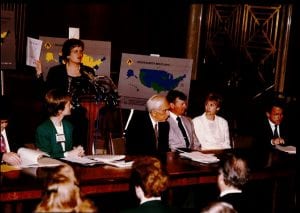 In 2014, Advocates created the Senator Frank R. Lautenberg Highway Safety Leadership Award which has been presented biennially by Bonnie Lautenberg in honor of her late husband’s impressive legislative safety legacy, including passage of the .08 percent BAC bill.  The award has been bestowed on Congressional recipients who have demonstrated the same safety gumption and grit as Senator Lautenberg and who have made meaningful contributions to highway and auto safety. 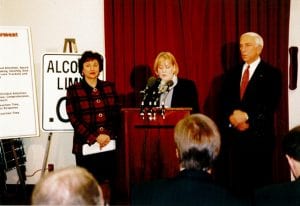 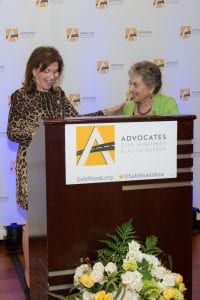 We hope the next award will celebrate the enactment of a safety technology requirement to significantly reduce impaired driving.