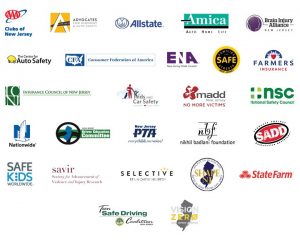 Coalition urges New Jersey Legislature to approve practice hours legislation (S1963/A1354) in the post-election session.  Arkansas, Mississippi, and New Jersey are the only states in the nation that currently don’t require this life-saving practice for new drivers.

Inexplicably, New Jersey remains one of only three states (Arkansas and Mississippi) that does not mandate practice hours for new drivers, even though consistent training during the learning period has shown a reduction in crashes during the first year of driving.

In fact, a study conducted by the AAA Foundation for Traffic Safety found drivers ages 16 – 17 years old are:

According to New Jersey Department of Transportation crash data, in 2019, over 30,000 teen drivers (16-19) were involved in crashes in New Jersey, including over 7,000 involved in injury or fatal crashes.

The Insurance Institute for Highway Safety’s GDL calculator estimates that if New Jersey were to add a 50 practice hours mandate, collision claims would be reduced by 13%, and most importantly, fatalities would be lessened by 3%. Requiring practice hours could prevent thousands of crashes and reduce fatalities across New Jersey.

“It’s time for New Jersey to join 47 other states in requiring practice hours and to prevent avoidable crashes and injuries on our roadways. AAA urges the legislature to act on S1963/A1354”, said Lauren Paterno, Government Affairs Representative, AAA Northeast. 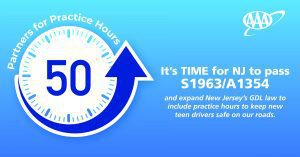 The AAA Clubs of New Jersey—AAA Northeast, AAA Mid-Atlantic and AAA South Jersey—provide automotive, travel, insurance, and financial services to more than two million members through 26 offices across the state. The AAA Clubs of New Jersey are affiliated with AAA, the not-for-profit, fully tax paying federation of automobile clubs, which serves as an advocate for motorists and travelers.

Cathy Chase, President of Advocates for Highway and Auto Safety (Advocates)
“Motor vehicle crashes are a leading killer of teenagers in the U.S.  Lack of driving experience and a tendency to take greater risks is a lethal combination for teens.  Addressing these shortcomings head on with proven solutions will make the roads safer for teens and everyone on the roads with them.  Bills pending in the state legislature (S. 1963/A. 1354) would add a supervised driving requirement and extend the learner’s permit phase.  These commonsense changes to the current graduated driver licensing (GDL) law will introduce teens to driving in a way that reduces risk and helps develop lifelong safe driving behaviors.  Advocates calls on the New Jersey Legislature to advance S1963/A1354 without delay.”

Arnold Anderson Detective-Retired, Coordinator -Community Traffic Safety Program, Chairman, NJ Driver Education Committee, Leader – Teen Safe Driving Coalition of NJ
“Requiring that teen drivers be required to practice driving at least 50 hours, (10 at night) is an investment in time which will result in the safety for all road users in New Jersey.”

Evan Correa, Vice-President, Youth Advisory Board, West Orange High School
“Given that motor vehicle crashes are among the leading causes of death for teens, it is crucial for amateur drivers to obtain the practice necessary to make good decisions on the road. As such, the passage of S1963/A1354, which mandates practice hours for teens under the GDL system, is a key measure needed to reduce teen traffic fatalities.”

Sangeeta Badlani, founding member of Nikhil Badlani Foundation, Families for Safe Streets NJ and Vision Zero NJ Alliance
“Losing a child is every parent’s worst nightmare. Let’s give our teens the tools to keep them safe. It is imperative that we pass bill A1354/S1963 now to prevent further tragedies.”

Janette Fennell, President, Kids and Car Safety
“As a parent and a safety advocate, I know teenagers need guidance developing the skills necessary for a lifetime of safe driving habits.  Unfortunately, crash statistics show that teen drivers are among the age groups with the highest risk of crashes, largely due to inexperience and risk-taking.  The danger is heightened during the first few months of unsupervised driving.  Fifty hours of driving practice with a licensed adult during the learner’s phase should be viewed as the bare minimum before putting our children behind the wheel of a multi-ton death machine.”