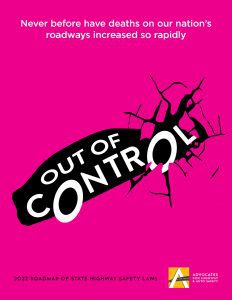 Out of Control Death Toll on U.S. Roadways Requires Urgent Action by State and Federal Officials — New Report by Advocates for Highway and Auto Safety (Advocates) Details a Comprehensive Plan to Prevent Crashes, Fatalities and Injuries

Advocates for Highway and Auto Safety (Advocates) today released the 19th annual edition of the Roadmap of State Highway Safety Laws (Report), an essential and effective safety action plan for state legislatures, governors and the U.S. Department of Transportation (DOT) to address the epidemic of motor vehicle crash deaths.  Recent reports from states throughout the nation align with data from the National Highway Traffic Safety Administration (NHTSA) for the first six months of 2021 showing an increase in crash deaths of historic proportions.

New public opinion data also released by Advocates shows that while many are unaware of exactly how far safety has spun “out of control” on our roadways, strong majorities are concerned about dangerous behaviors that are frequent factors in crashes, including speeding, distracted driving, impaired driving and lack of seat belt use.

Cathy Chase, President, Advocates for Highway and Auto Safety: “The new public opinion poll we commissioned found that nearly 75 percent were not aware of the drastic jump in traffic fatalities during the first six months of 2021.  Still, 66 percent of respondents said not enough is being done to address dangerous roadway behaviors.  These findings emphasize the need for progress on traffic safety laws at the state level and swift action at the U.S. Department of Transportation (DOT) to implement the safety provisions in the Infrastructure Investment and Jobs Act ((IIJA), Pub. L. 117-58).  The IIJA took essential steps forward for vehicle safety that the DOT should consider as a ‘floor’ for what must be achieved, not a ‘ceiling.’  We have proven solutions at hand.  We need our nation’s leaders to step up and implement them with urgency.”

U.S. Representative Jan Schakowsky (D-Illinois), Chair, U.S. House of Representatives Committee on Energy and Commerce Subcommittee on Consumer Protection and Commerce: “We have a crisis right now in deaths on the highway.  In the bipartisan infrastructure legislation there is an incredible package that addresses this crisis that would save, literally, tens of thousands of lives, that would address the millions of injuries on our highways every single year, and save millions and millions of dollars that are associated with crashes.  But the job isn’t done, because now we have to make sure that the regulators get on the move to have the proper regulations to actually make these improvements come to life.”

Assemblywoman Shannon Bilbray-Axelrod (D-Nevada): “Improperly restrained child passengers are a serious public health problem, yet it can be addressed with a proven solution.  Ensuring children are in the appropriate restraint for their age and size greatly improves their chance of surviving a crash and avoiding serious injury.  I am very glad to report Nevada upgraded its child passenger safety law last year upon enacting a bill that I sponsored, Assembly Bill (AB) 118, and which was cosponsored by 11 colleagues.  Passage of this new law also resulted in Nevada rising to a ‘yellow’ rating in the Advocates’ Roadmap Report.  I urge every state elected official to pick up this report and use it as a playbook for action in 2022.”

Alex Otte, National President, Mothers Against Drunk Driving (MADD): “The reports over the past two years are not good.  Alcohol and drug impairment, speeding, not wearing seatbelts are cited as the leading contributors to more crashes, more injuries and more deaths at a time when fewer cars are on the road.  This is a public safety crisis.  State legislatures can do their part to stop this by passing laws that keep their communities safe and spare families the trauma of being impacted by someone else’s choice to drive impaired.”

Alan Maness, Vice President of Federal Affairs and Counsel, State Farm Insurance Companies, and Insurance Co-Chair of Advocates: “With crash fatalities reaching levels not experienced in nearly 15 years, today’s release of Advocates’ Roadmap of State Highway Safety Laws could not be timelier.  During the thirty-three years this unique coalition has existed, it has been working consistently and conscientiously to advance commonsense policies that produce safe vehicles, safe roads, and safe road users.  While many lifesaving advances have been achieved preventing untold numbers of crashes, fatalities and injuries, we are currently facing an alarming upward trend in traffic fatalities over the past two years.  The 16 optimal laws detailed in the Roadmap Report are proven lifesavers.  Each law enacted prevents future tragedies.”

Lieutenant Carmen Trevizo, Oro Valley, Arizona Police Department: “My cousin Christina was killed by a drunk driver when she was only 18 years old.  I will never forget that day, and this devastated our family.  Seeing other families experience the loss of a loved one in preventable crashes that occur on our roadways is a heart-wrenching aspect of the job of law enforcement officers.  Advancing strong traffic safety laws and employing successful vehicle safety systems are necessary to turn the tide on rising crash deaths and counter persisting traffic safety dangers that inflict pain and suffering on families.”

Mary Jagim MS, RN, CEN, FAEN, Past President, Emergency Nurses Association: “The consequences of continued inaction are all too clear to emergency nurses.  We spend our days receiving and treating patients who are injured in crashes, many of whom tragically do not survive or others who leave our hospitals with a debilitating, lifelong injury.  Prevention-driven solutions, like those outlined in Advocates’ Roadmap Report, keep people from needing to come into our ERs.  This outcome is one we can all agree is a win.”

One state, Nevada, was upgraded from “red” to “yellow” due to enactment of a law requiring child passengers remain in a rear facing safety seat until age two or longer and that children use a booster seat until 57 inches in height.  This brings the total number of states receiving the “yellow” rating to 31.  Within this group is the state of Wisconsin, which in 2021 extended the supervised driving time requirement for teen and novice drivers to 50 hours, one of six graduated driver licensing (GDL) laws rated in the Roadmap Report.

Opportunities for improvement in 2022:

No state has enacted all 16 of Advocates’ optimal laws.  Based on Advocates’ safety recommendations, states across the nation need to adopt 390 laws.

The recent, unprecedented spike in fatalities merits urgent action.  Fortunately, the solutions to persistent issues causing crash deaths and injuries, as detailed in Advocates’ Roadmap Report, are verified and available.  Every serious preventable crash exacts a physical, emotional, and economic toll.  Lawmakers and those empowered to protect road users must chart a course in 2022 to address “out of control” fatalities by supporting proven countermeasures and commonsense vehicle safety upgrades.