Statement on the Passing of Former U.S. Transportation Secretary and Congressman Norman Mineta

Statement on the Passing of Former U.S. Transportation Secretary and Congressman Norman Mineta 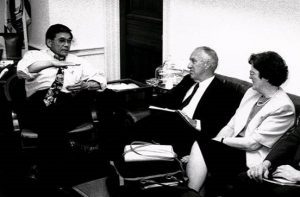 Advocates for Highway and Auto Safety (Advocates) is saddened to learn of the passing of Norman Mineta.  His contributions as a member of Congress from California, Secretary of the U.S. Department of Transportation (DOT) during the George W. Bush Administration, and beyond leave an eternal safety legacy.

Cathy Chase, President, Advocates for Highway and Auto Safety: “Former Transportation Secretary and Congressman Norman Mineta provided determined, bipartisan leadership on roadway safety issues which continues to result in countless lives saved and injuries prevented.  An early collaborator with Advocates for Highway and Auto Safety (Advocates), Mr. Mineta was instrumental in working to enact the first national surface transportation bill to comprehensively address the need for safer roads, safer drivers and safer vehicles.  For his efforts, Advocates honored Mr. Mineta with a ‘Celebration of Safety’ award in 1992.  On behalf of Advocates’ Board of Directors and staff, I send our deepest gratitude for this safety hero and condolences to his family and loved ones.”

Joan Claybrook, former Administrator, National Highway Traffic Safety Administration and Founding Board Member, Advocates for Highway and Auto Safety: “Throughout Norm Mineta’s distinguished career in Washington, DC, he was a reliable and respected safety stalwart.  As an elected Member of Congress, a leader on the influential House Public Works and Transportation Committee, and as Secretary of the U.S. Department of Transportation (DOT), he didn’t just talk about safety but enshrined it in his life’s work.  His quiet and steadfast leadership resulted in significant safety improvements on our roads and highways and in the cars we drive.  When he served in Congress and as DOT Secretary, several of the most consequential federal safety laws were enacted and he played a critical role in every bill.  These laws resulted in front airbags as standard equipment in all cars, lifesaving improvements in vehicles to prevent and mitigate rollover crashes that, at the time in 2005 were killing more than 10,000 people annually, enhanced safety requirements for large trucks, and programs and policies to curb impaired and distracted driving.  Every day his formidable achievements continue to make our roads safer.”

Jackie Gillan, President Emeritus, Advocates for Highway and Auto Safety: “The safety community always knew we had a friend and tireless supporter when working with Norm Mineta in Congress and at DOT.  He was an effective and energetic ally in pushing safety measures that were frequently controversial and opposed by well-financed special interests.  Norm understood that safety was non-partisan and affected the lives of every family in every state.  Even after he left government, he was there to lend his voice and stature to advance safety.  At a critical point in our efforts to pass a federal teen driving law, he partnered with another former DOT Secretary, Elizabeth Dole, to express their bipartisan support for the measure.  That effort completely captures the dedication of Norm Mineta throughout his life to advocate for laws and programs to prevent catastrophic crashes and spare families the needless loss of a loved one.”

Advocates for Highway and Auto Safety is an alliance of consumer, medical, public health, law enforcement, and safety groups and insurance companies and agents working together to improve road safety in the U.S.  Advocates’ mission is the adoption of federal and state laws, policies and programs that prevent motor vehicle crashes, save lives, reduce injuries, and contain costs.