Motor vehicle crashes are among the leading causes of death for American children ages 1 to 14.  In 2019, 1,053 children aged 14 and younger were killed and an estimated 183,000 were injured in motor vehicle crashes.  The best way to protect children aged 12 and under from risks posed by air bags is to place them in the back seat, restrained by a child safety seat, booster seat or safety belt, as appropriate.

Booster seats are intended to provide a platform that lifts the child up off the vehicle seat in order to improve the fit of the child in a three-point adult safety belt. They should also position the lap belt portion of the adult safety belt across the child’s hips or pelvic area. An improper fit of an adult safety belt can cause the lap belt to ride up over the stomach and the shoulder belt to cut across the neck, potentially exposing the child to serious abdominal and neck injury. Additionally, if the shoulder strap portion of the lap/shoulder belt is uncomfortable, children will likely place it behind their backs, defeating the safety benefits of the system. When children are properly restrained in a child safety seat, booster seat or safety belt, as appropriate for their age and size, their chance of being killed or seriously injured in a car crash is greatly reduced. 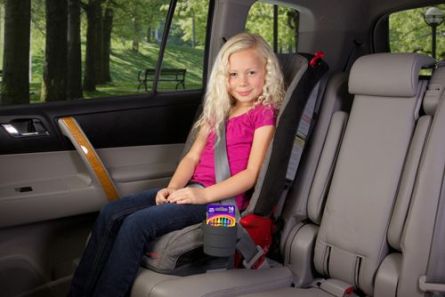